Miss Orabel Jancy is indeed clever, and she knows it. The oldest of widowed Squire Jancy's six children, all living at home, Orabel is the author of several scientific books, and has many letters after her name. To Orabel, education and intellectual pursuits are everything that matter in life. She is secretary of a women's intellectual club that teaches that women are superior to men, and the members have all agreed to remain single because men would hold them back in their academic goals. However, when Orabel was born, a deathbed promise was made with a friend that Orabel and the friend's son, Harold Kingdon, should be given the opportunity to marry. Nobody thinks to mention this to Orabel, and she only learns of the arrangement when she is grown up and Harold Kingdon is already on his way from India -- to propose to her! Even before Harold arrives, Orabel decides she cannot possibly marry a lowly military doctor, when she is so intelligent. As soon as they meet, the feeling of dislike is mutual. But Orabel's younger sister, Annis, who never did well in academic subjects, is also of marriageable age, and would dearly love to settle down with the right man. Their younger brother and small sisters view the developing situation with interest.

The Squire had never found courage to broach the fact of the offer to Orabel, who looks as though her blue eyes would wither the sheet of foreign notepaper in front of her.

"You know, Orabel," puts in Annis, "we did hear something long ago about papa and mamma promising somebody or other out in India should have a chance to court you."

"Oh, do say 'yes,' Orabel," pleads a chorus of little sisters. "It will be so lovely to have a wedding, and Phil can be a page and wear a fancy dress."

"Can he?" growls Philip. "I'd like to catch myself in lace and velvet like those kids at the Hemmings' last week. Orabel, I think you ought to send him your portrait. Let him know, at least, what he's wooing."

With these words Philip beats a prudent retreat, and Orabel gives utterance to such tones that Annis, trembling at her side, is almost in tears.

"Has it come to this," Orabel asks, "that I, the secretary of the Mount Athene Club, should be affronted, insulted by a letter like this? Am I not Orabel Jancy? Am I not the pioneer of a new and emancipating system? And who is this Harold Kingdon that he dares to cross my path with his jests concerning infantile betrothal?" 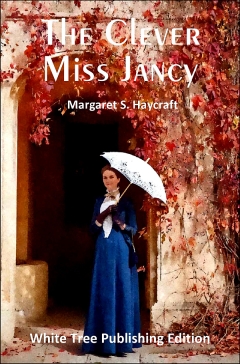