Una Latreille inherits the St Pensart's estate which has been in the family since the Norman Conquest. Unfortunately the estate is now bankrupt, and although still in mourning, Una's only hope of living in the style to which she has been accustomed is to marry a wealthy man, and quickly. Several suitors have disappeared after learning of the debts, and the one man who still expresses any interest in Una is Keith Broughton. Keith started work as a mill hand, and is now the young and wealthy owner of a large woollen mill. But how can she possibly marry so far beneath her class?

Reluctantly, Una agrees to marriage on condition that there is no physical contact between them, and certainly no honeymoon! She also insists that she will never, ever suffer the indignity of meeting anyone in his family, or put one foot inside the door of his mill. This book was first published in 1898 by SW Partridge and Co, publishers of both Christian and secular books. Although there is no openly Christian message in this story, unlike the majority of Margaret Haycraft's books, it deals sensitively with the true nature of love -- as well as being an extremely readable story. 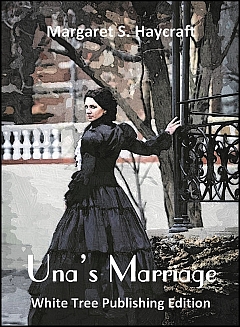