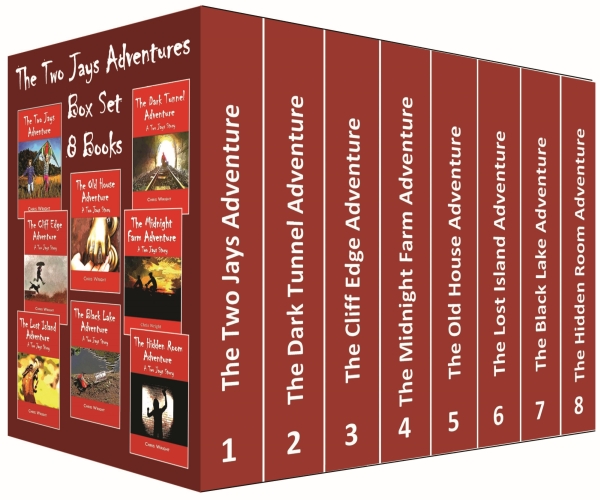 A Box Set of eight full length stories! The first book, The Two Jays Adventure, was intended to be a one-off story about James and Jessica who are cousins, sometimes known as the Two Jays. But the more I wrote about them, and the way they got on, joking together, I was thinking perhaps I should find out if they have any more adventures.

The only way to find out was to write another story, working on James’ anxiety of being under the ground, as he discovered when visiting the caves in Cheddar in the first book. How about a disused railway tunnel? I could hear James saying, “It’s a tunnel. You go in one end and come out the other. Simple. How could we possibly get lost in an old railway tunnel?” Guess what!

I set the story in the Peak District of Derbyshire, an area where my Wright ancestors lived, and where I had explored some of the many caves. I called it The Dark Tunnel Adventure. And then I couldn’t stop wondering what the cousins got up to next. How about a house perched on a dangerous cliff edge on the west coast of Wales, an unpleasant elderly aunt, and the worst storm in living memory? Yes, The Cliff Edge Adventure made it’s way onto my computer.

After writing The Cliff Edge Adventure, I could see James and Jessica on holiday in an area of Cornwall I know. Maybe an old tin mine to explore? No, old mines are dangerous, but it’s surprising how dangerous a holiday can be on a farm where two men with a fierce dog do their best to keep the Two Jays away from an excavation. For obvious reasons, Jessica and James call the dog the Hound of the Baskervilles. The story takes place around a remote Cornish farm: The Midnight Farm Adventure.

I was so keen to find out what the next adventure would be, that it definitely wasn’t time to switch off my computer and stop discovering what James and Jessica were doing. Suddenly Maddie appeared: a likeable but slightly unusual girl wearing a mix of bright colours, living in a creepy old house. So next came The Old House Adventure. Unfortunately, in the story, first her father and then Maddie go missing!

Maddie was intended to only appear in that one book, and the Two Jays go in the next adventure to a remote part of the Scottish Highlands, where there is an island that seems to have disappeared. A Scottish boy who claims he’s a Viking provides plenty of interest ‒ and danger ‒ and so do a suspicious couple in a campervan who don’t want to be seen on the island. The Lost Island Adventure.

I was missing Maddie in her bright clothes looking like an exotic parrot, but fortunately James and Jessica meet up with her again in the next story, on an archaeological excavation where she is with her father, who is a slightly scatterbrained but pleasant professor of archaeology. Something mysterious is submerged in a large lake, and Maddie is afraid she knows what it is! The Black Lake Adventure.

In the final adventure in this Box Set, Maddie enlists the Two Jays’ help on a school project, writing about her house. The builder has found the original plans for the house which was built in 1857, which puts them on the trail of a hidden room that might have been the den of the infamous Maggart Gang in the early 1800s. Unfortunately for James, it looks as though it could be under the ground. As I thought about the story, I realised that being James, he would be sure to get trapped under the ground ‒ again! What horror is hidden behind the brick wall in a room deep below the garden?  The Hidden Room Adventure.

At the time of releasing this Box Set, I have no immediate plans to discover what the Two Jays and Maddie get up to next, although I have to admit I keep wondering! Maddie? Yes, she seems to have become very much part of the stories. If I do write another, it will still be scary in places, and still have some amusing bits, and still have Maddie. I find the way Jessica and James joke with each other, trading friendly insults, is very much part of their relationship. And even Maddie, who lives alone with her father, started to join in after a time.

Where do my stories come from? It’s a complete mystery. I certainly wasn’t born with them preloaded in my head, like a hard drive containing lots of stories, but I’m someone who can’t stop thinking “what if?” I write about things that interest me, like photography, archaeology, geology, coin collecting, natural history, caving, and just about everything else that appears in these stories. And of course my Christian faith.

You can read the stories in any order, but I suggest you start with the first one, because in every adventure time moves on, and the characters get to know each other better. But, hey, it’s your Box Set. You can do what you like!

If you would like to contact me and tell me what you like best about the stories, and what you would like the next story to be about (if there is one) you can write to me through the publisher’s email address, wtpbristol@gmail.com, but please get your parents’ permission first.