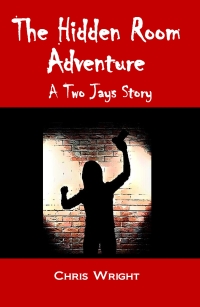 It’s the October mid-term holiday, and cousins James and Jessica, known as the Two Jays, get an excited phone call from their friend Maddie. The builder has found the original plans for her house, and Maddie discovers it was built in 1857 on land once belonging to Rootsdyer Farm. Some later words added to the plans set the three on a hunt for an underground room somewhere in the garden. What is hidden behind the brick wall that sounds hollow?

Who was Charlotte? According to a handwritten note on the plans, Charlotte once rested in the garden. Where? And did the Maggart Gang led by Josiah Devauden have a hideout on the farm in the early 1800s? Maddie needs to find out more for her school project, but the three soon discover that being trapped under the ground is no fun. Another exciting story in the Two Jays adventure series. They can be read in any order, although each one goes forward slightly in time.