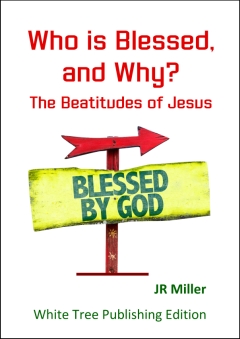 Who is Blessed, and Why?

Another book from JR Miller, one of White Tree Publishing’s most popular non-fiction authors. He writes that it is well for us to study carefully the Beatitudes that fell from our Lord’s lips while He was here. We are struck at once with their unworldliness. They are altogether different from the world’s beatitudes. They run directly counter to the attitudes which rule in human society and give impulse to human ambitions. They are teachings which are intended to be against nature and to revolutionize nature. The Bible is a book of blessings. Wherever we see Jesus in the Gospel story He is giving out blessings. Now it was on the children’s heads, now on the leper, now on the blind eyes, now on the sick, now on the dead that He laid those gracious hands, and always He left some rich gift with His touch.

One day those gentle hands were drawn out and nailed on the cross, yet even then it was in blessing that they were extended, for it was for our sins that they were thus transfixed on the wood. In the very last glimpse we have of Jesus in this world, He was in the attitude of imparting a blessing. It was on the mount of ascension. He had been talking with His disciples, and then He lifted up His hands and blessed them.