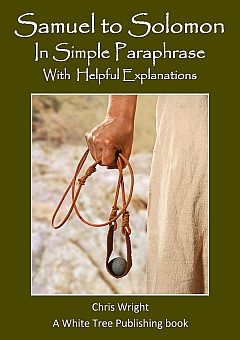 There’s much more to the story of Samuel than knowing that he was a boy in the Tabernacle who heard God calling him. There’s a lot more about King Saul that we don’t hear as children.

There’s much more to the story of David than knowing that he was a shepherd boy who killed Goliath, became king, and wrote some of the Psalms.

And Solomon? Yes, the wisest king ever. He met the Queen of Sheba, but does he really stay wise right to the end of his life? Why do the tribes of the children of Israel divide into two hostile kingdoms after his death?

This White Tree Publishing Paraphrase combines many of the major – and minor – events from these separate Books in a straightforward retelling verse by verse of the Bible account in simple English, in the order in which the events occur. Many verses and chapters have been omitted to produce this abridged version.