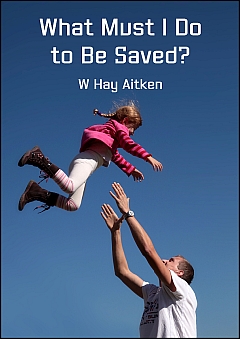 What Must I Do to Be Saved?

“What must I do to be saved?” asks the Philippian jailer. Paul tells him, “Believe in the Lord Jesus and you will be saved,” But what does it mean to “believe in”? W Hay Aitken writes, “The child that you place high up and tell to jump down into your arms, is as fitting an illustration as you could wish. There the child stands hesitating, not because they have any real doubt in their mind of your ability to catch them, but rather because they allow their will to be influenced by their feelings, instead of being affected by an obvious certainty. That is faith. Faith is not feelings ‒ it is trust. Trust in Someone. Jesus.